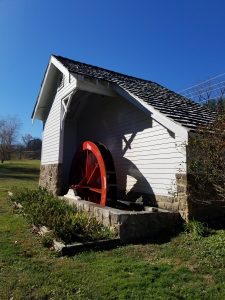 Shawneeland was created as a resort and recreational community taking advantage of the natural mountainous landscape of Great North Mountain. The original focus was a ski resort that catered to DC residents as a place to get away from the fast pace of city life. Shawneeland was formed by Don Lamborne in 1955 and originally included 7,000 acres with 3,000 lots. As the community grew and residents wanted to live there year round, increased services were needed and so the county took over in 1987 with a sanitary district to administer all of the property.

Many of the details in this article have been found in the Lamborne library collection which houses 4 boxes of documents on Shawneeland starting in 1955 to present day. Roger Lamborne, Don’s son and local real estate agent, and others also share a lot of information on the Shawneeland Facebook page which is a great place to see comments from residents that were present in the beginning days!

Shawneeland included beginner and advanced ski slopes, a lodge, restaurant, pool, lake with beach, golf course, shooting range, horse back riding, and even a teen club. The Shawneeland Ski area was the first in the nearby Washington DC using man made snow. The first season was underway in 1956 with one small slope. It would be expanded to a Beginners, Intermediate and Advanced slopes with tow ropes to bring skiiers back to the top. A ski lodge was constructed at the top of the ridge at the end of Echota Trl with ski rentals and a small café for coffee, burgers etc.

The Tecumseh Lodge was the place to relax by one of the fireplaces, or even rent a room upstairs for visiting family. Originally the “Jacob Kackley” cabin, built in the mid 1700’s and then expanded, it was known for having a stream running through the basement that exited through a pipe and into a pond. The lodge was demolished in 1992.

Lake Cherokee started filling in 1964. There were even English Fallow Reindeer housed in the wooded area behind the mail house at the entrance. The Council Fire area was where barbeque chicken and sumptuous rounds of beef were cooked by Operations Manager Charles Whetzel over open flame for the many weekend lawn parties at the lodge.

Swan Lake Manor House was located at the corner of Shawnee and Tecumseh Trails. The original stables were behind the Manor House on Tecumseh Trail. Horse back riding was one of the most popular summer activities among Shawneeland’s property owners and their guests. Jerry Clowser managed the stables for much of this time period. The first stables were located in the barn that once stood on Shenandoah Trail near the existing beach. Barn dances were also popular activities in those days. After that barn was torn down, the tradition of dances continued on the tennis courts by Tecumseh Lodge.

After the old swimming pool was closed the new swimming pool opened in July 1968 just in time for the fourth of July weekend festivities. This pool was located on the ridge near Aspen and Maple Trails and replaced the first Shawneeland pool that was located across from the lodge. The Tot lot is situated there now.

The Clowser house is the only original historic house structure that remains in Shawneeland in tact. There is currently fundraising and public support to save the house. The Clowser family is famous in our area for dealing with, and surviving Indian raids after the French and Indian War.

We’ll be featuring a lot of historic photos of Shawneeland in the future! If you have more information on Shawneeland, please let us know so we can share with everyone!